The NSW Bird Atlassers Inc is actively engaged in conservation issues that  directly impact on the welfare of native birds and preservation of their  habitats. It is estimated that 1 in 5 native birds are now under threat through land clearing and development.

Less than 1% of native grasslands in NSW remain in the state they were in before European settlement. Such birds  as Plains-wanderer, Brown Songlark, and Richard’s Pipit are among grassland birds being adversely affected. 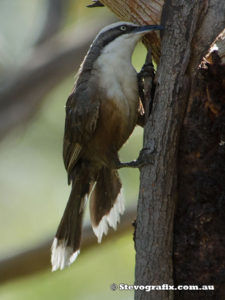 Over 90% of pre-European woodland has been cleared from some districts of the state, and that which does remain is often severely fragmented and degraded.  Birds such as Regent Honeyeater, Swift Parrot, Superb Parrot, Red-capped Robin, Grey-crowned Babbler, Brown Treecreeper, Hooded Robin, Speckled Warbler, Diamond Firetail and Black-chinned Honeyeater are threatened by this habitat loss.

Wetlands with their important role ecologically and in biological diversity are also under severe threat. Irrigation schemes are demanding more water inland, and land filling is being carried out on the coast as need for housing and tourist developments grows. Ground Parrot, Southern Emu-wren and a whole range of waterbirds suffer through habitat loss.

Beaches face increasing recreational usage by humans, their vehicles and their domestic pets. Disturbance of birds such as migratory waders, Little Tern, Hooded Plover and Beach Stone-curlew directly impacts on their chances of breeding success and long term survival.

There is a pressing need to know much more about the birds of the state,  where they are found and what their needs are, and the work of the NSW Bird Atlassers Inc is of prime importance here.  Where conservation issues involve bird habitat, the NSWBA undertakes a role lobbying the relevant authorities be it council, state or federal government or industry, mostly by writing letters on the subject or by joining with other organisations, pushing for a balanced and considered approach to the issue.

Should any member become aware of an issue proposing to threaten an ecosystem of importance to existing bird welfare, they can email to our Conservation Officer Jane Paul conservation@nswbirdatlassers.org.au